Il Grande Piano is a huge handmade keyboard installed on the floor and played with the feet, dancing on it.

An innovative show that combines music and dance.
The show is suitable for any kind of event, it has a great impact and the audience is completely involved. After the performance everyone is invited to play some tunes on il Grande Piano or just have a musical walk on it.

il Grande Piano has performed throughout Italy and in 15 countries all over the world.

il Grande Piano is a musical project founded in 2011 by the show company Faber Teatro, based in Cremona. 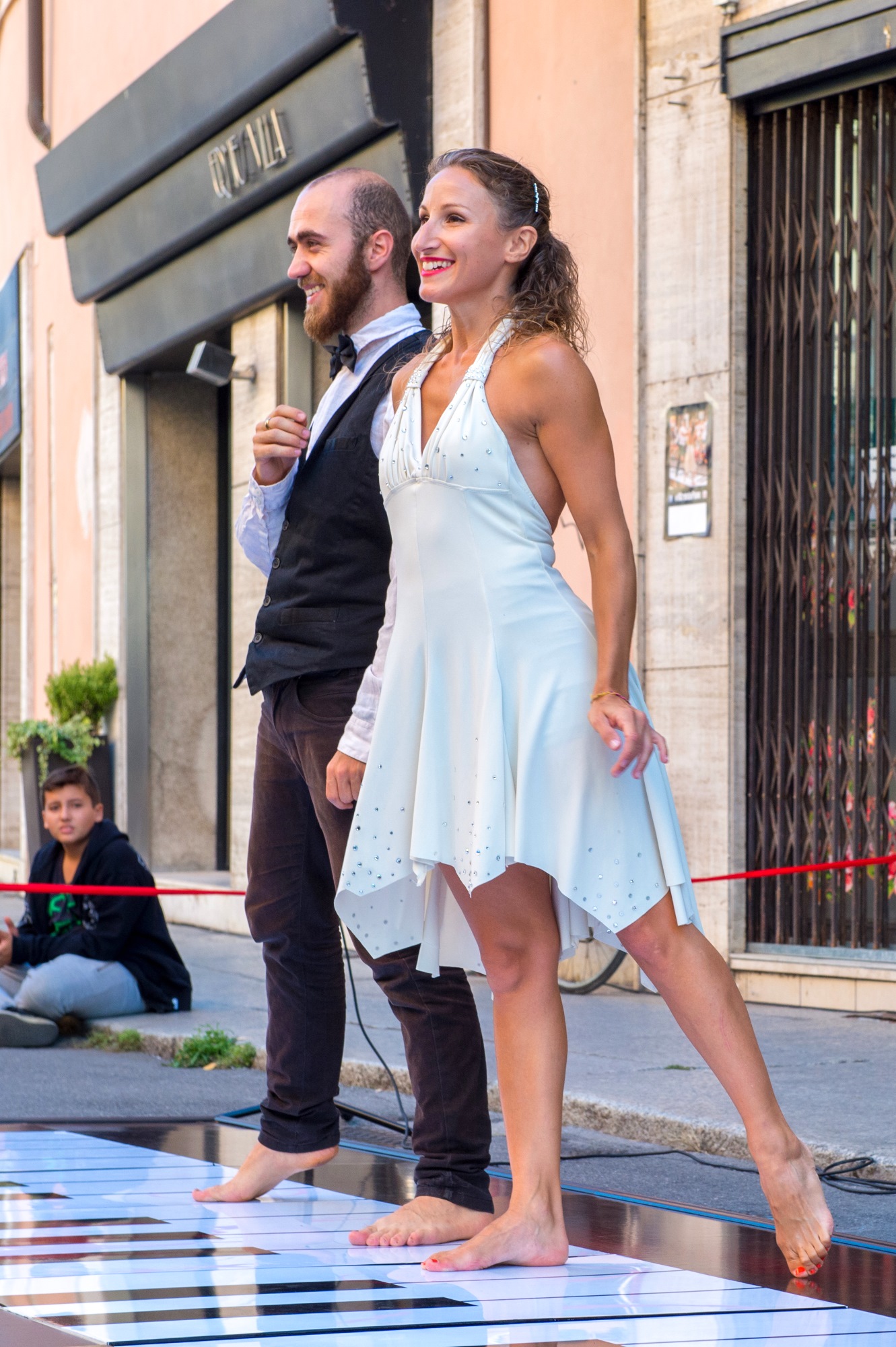 Made by Manuel Benyacar, a violin maker from Buenos Aires, Argentina, who has been living in Italy since 1987 and after having built some violins, he started working in robotics and electronics and interactive systems. Combining all his passions, he created his first hand-crafted “Grande Piano” inspired by a scene from the movie BIG with Tom Hanks (1988), where he plays with his feet a big piano in a toy store in New York.

Since 2011 the “Concerts” on “il Grande Piano” have become increasingly numerous and, in recent years, thanks to the spreading of viral videos on social networks (more than 600 million total views) the company has started performing  in Europe and all around the world.

We have been invited to Mexico, in the city of Puebla to “La Ciudad de las Ideas – Festival de Mentes Brillantes” in 2018, to a TEDx from Pantheion University, Athens, Greece in 2019. We performed also in Abu Dhabi, for the final Formula 1 Gran Prix in 2018.

In 2016 the company handcrafted a new version of il Grande Piano with a very easy setup and light transportation which allows the company to travel easily with the Grande Piano everywhere as a normal baggage.

The piano dancers help people play famous themes and create simple dancing musical choreographies. It is an instrument that involves different aspects: music and musical didactics, dance, physical movement, coordination, memory and group work, as it can be played by several people at the same time. At the end of the Concert the audience is invited to try and play some melodies on the Grande Piano, in a relaxed and entertaining atmosphere.

We have performed in different TV programs for Germany, Italy, Switzerland, Japan and Korea. Discover here our TV videos gallery.

Our show is focused on dance and music with simple theatrical scene and brief spoken parts that can be in Italian, English, Spanish and French.

#ilGrandePiano Improvisations with a Funny COW at Venice Carnival 2018..!

Il nostro sito utilizza i cookie per fornirvi la migliore esperienza di navigazione possibile. Se continui ad usare il nostro sito, sei d’accordo all’utilizzo dei cookies. We use cookies to ensure that we give you the best experience on our website. If you continue to use this site we will assume that you are happy with it.OkGuarda la pagina di Cookie Policy